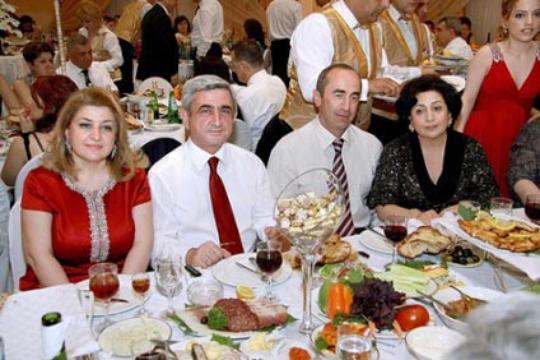 Feast during the plague begins

While the political parties are trying to decide whether to participate or not participate in the presidential elections, the society is slowly approaching the New Year’s shopping, writes reporter of “First News and Analyses” Eghiazar Aytaptsi. It is described by him as flash of luxury and misery, which resembles a feast during the plague.

He notes that everyone, regardless of being poor or rich, appear on a path of wild run, forgetting everything, by just giving a tribute to the familiars, turning off their brain and mind and turning on their instincts and stomach. It’s hard to say what destroys Armenia more, this savage, selfless run for nothing, or the political games that are taking place with regard to the presidential election. Eghiazar Ayntaptsi finds that the first one is more likely in our realty and the political games are the result of it, a sad but natural result, because these games are taking place in society, as a result of upside-down turned values and thinking. When these things are in their places, political games will become completely meaningless and useless, because their members will understand that they have to deal with wise people.

“Armenia’s society should eventually get rid of subjugating itself. After all, this New Year’s crazy running is subjugating, when we “public” chains penetrate the joy of the holiday. Political forces will naturally make use of that opportunity and throw off the responsibility and start absolutely irresponsible games. It is time that the society starts thinking about self-liberation.” concludes the reporter.