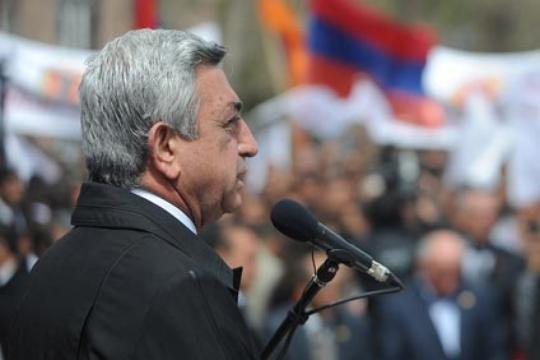 Hovhan Mandakuni states in his political analysis the whole international society and super powers expect Armenia to have a competitive election in 2013. After Tsarukyan withdrew his candidacy, the competitiveness is put under a doubt.
Who is going to be Sargsyan’s opponent? To consider the epos expert Vardan Sedrakyan or Marxist David Hakobyan serious candidates makes no sense. Raffi Hovhannisian does not have that mobilization power and the only one remaining is the ANC representative in the face of Ter-Petosyan. However Ter-Petosyan today is deprived of the powers he used to have in 2008.

Mandakuni states Sargsyan needs to artificially create an opponent to close the eyes of the international society and the West. As such an opponent Raffi Hovhannisian or Ter-Petosyan could be represented.

Mandakuni believes the most important thing for the West is not only the competitive character of the presidential elections but to develop the reforms process. The political deadlock may be a justification for Sargsyan in the eyes of the international society to show that the country is already in a tense intrastate condition and the reforms would only hurt it more, thus diverting from reforms at the near future.

The international society, as Mandakuni concludes, most probably decided to leave Sargsyan for a while to formulate his own structure of governing in order not to have any reasons to escape from the reforms later. This is the reason the “competitive” elections are allowed by the international society and no imposing takes place in regards with having a competitive election.