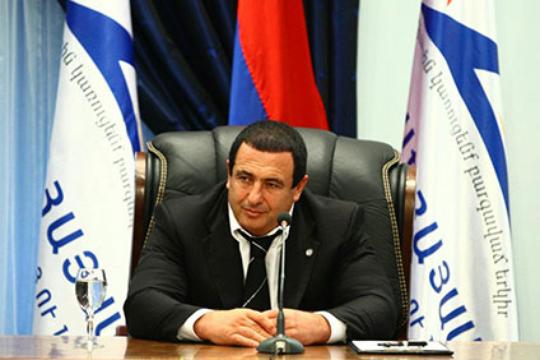 According to the reporter of “First News and Analyses” Yesai Araratyan the information about Gagik Tsarukyan’s decision not to run brought Armenia’s political field into short-term chaos. Now new rules and rearrangement are needed.
“If Tsarukyan run for the presidential elections, then after it, as a politician, he will cease to be legitimate. Entering into political struggle not as a leader of a party, but as a presidential candidate, Tsarukyan would not be able to realize itself as much as required, and would not be able to meet the responsibility that is put on him.” writes Araratyan.
He notes that Tsarukyan’s ratings will decline now, but the decline will be less than it could have been in the case of running and not winning. If within the power Tsarukyan’s problem is related to the electorate arithmetic and business interests, within the public Tsarukyan’s removal is of the ideological importance. And it is not about his personality or economic capital at all, but about him as a human system, about “dismantling.”
“Today such situation is established in Armenia, where Tsarukyan essentially holds symbolic sense and completes criminal oligarchic model of the power. And though Serzh Sargsyan is standing on top of the model, he has managed to throw off this image and responsibility from his shoulders.”
Taking into account the expectations from the civic arena, associated with creating political systems, Tsarukyan’s presence in the political arena would bear more and more rejects. Despite the fact that he is not taking part in the elections, he is still in power and continues to be the leader of the second leading party, supports Eurasian interests and in fact continues to be eternal pledge of criminal oligarchic model.
Araratyan concludes with the statement that the fact of Tsarukyan’s notbeing nominated created a maze not only in the opposition and the government, but also in the sense of general public transformations. And we can come out of the maze, by never considering Tsarukyan out of the game.