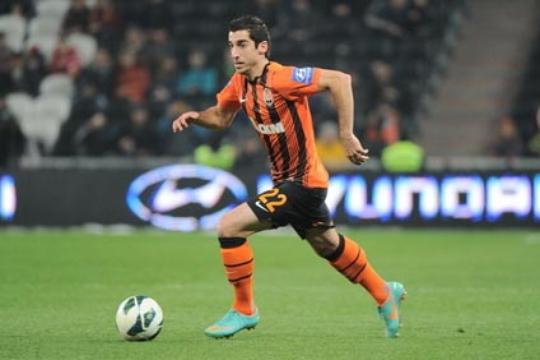 The official UEFA Champions League magazine has published Shakhtar midfielder’s story. Shaktar.com on their website presentes the most interesting extracts from the Group E column about Henrikh Mkhitaryan.

– Voted FC Shakhtar Donetsk’s player of the season for 2011/12, Henrikh Mkhitaryan is, if anything, even better this time around. The Pitmen won their first 15 league games of the season, Mkhitaryan played in 14 and scored 16 goals. It’s a barely credible statistic, particularly as he is more of a midfielder than a striker, and spent much of last season as a deep-lying creator or even the holding player. He isn’t 24 until January, yet already it seems legitimate to hail Mkhitaryan as the greatest Armenian footballer since the demise of the Soviet Union, in the pantheon alongside striker Nikita Simonyan and midfielders Eduard Markarov and Khoren Hovhanisyan. Since Fernandinho, out injured for most of last season, has returned Mkhitaryan has enjoyed more freedom, advancing into the role previously occupied by Jadson, who is back in Brazil.
– The other reason he finds the net so often is that he can score goals of all kinds. Clinical finishes, sublime volleys from the edge of the penalty area, rapid counterattacks where he sprints clear after hovering by the shoulder of the last defender, a 360 degree turn and shot from close range – these are all in Mkhitaryan’s repertoire. He doesn’t swell on his goal tally. To an extent he is the beneficiary of Shakhtar’s fluid system in which centre-forward Luiz Adriano’s main role is not to score himself but to create space for the mobile trident of Mkhitaryan, Alex Teixeira and Willian who play behind him.

– Mkhitaryan was born into football. His father, Hamlet, was a striker for FC Ararat Yerevan, Armenia’s most successful club in the Soviet era, in the late 1980s. He had a brief stint at FC Kotayk Abovyan, and in 1989, a few months after Henrikh’s birth, was transferred to the French club ASOA Valence, where he spent five years before a move to ASA Issy, picking up two caps for the newly independent Armenia. Even then, Henrikh’s love for football was clear. “When I was a child I’d watch my father play and always wanted to follow him to training,” he said. “When he didn’t take me I’d stay by the door crying. I always wanted to become a football player and I thank my parents, who helped me so much to realise this dream. They always supported me on my path.”

– Much support has come from his mother. The Mkhitaryans returned to Yerevan in 1995. A year later, when Henrikh was seven, his father died from a brain tumour. Football became his solace and a family business. Henrikh’s mother works as head of the national team’s department at the Football Federation of Armenia, and his sister Monica works at UEFA. No other Armenian enjoys such a high profile as Mkhitaryan. He knows he has a great responsibility as a standard bearer for the Armenian game.

– With no local star to idolise, Mkhitaryan looked further afield in his quest for inspiration. “I appreciated the style of Zinedine Zidane, what he did on the pitch,” he says. “He was like a magician to me.” While Zidane had to move to Italy to reach his peak, Mkhitaryan believes he can scale the heights with Shakhtar. The question of whether the club can establish themselves as one of Europe’s elite rather than a decent side that sometimes make the knockout stages of the UEFA Champions League seems to surprise him. “Of course we will!” he says. “We’ve got a really good team, a good coach who gets better year after year and who gives everything he’s got to his players, to make them improve. I’m growing up with him and I thank him for that. Following his lead, we’ll be able to achieve great success.”
– He enjoys a close relationship with Mircea Lucescu, a coach who prefers to mould young talent. “It wasn’t easy for him,” says Lucescu, “but his integration was speeded up by his football intelligence. His game awareness may be his most valuable quality – that and the speed, power and technique Henrikh was gifted by nature and has developed. Because of that, he’s one of the players who most consistently fulfils the tasks set by the coaching staff. Working with him is fun.”