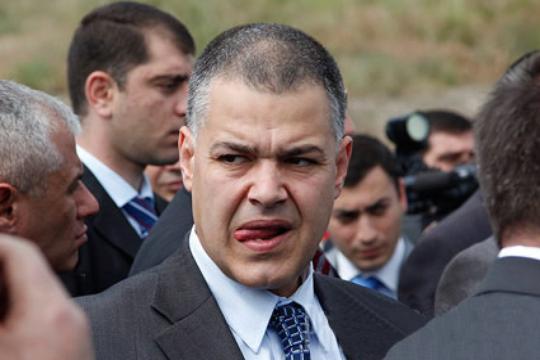 The leader of the Armenian delegation in PACE, member of the Republican Party of the National Assembly, leader of the State – legal committee of the National Assembly, ex – minister of Justice David Harutyunyan, who is famous as a basic weapon in the hands of authorities abroad, and who, thanks to his knowledge and friendly smiles, can mislead the international community presenting the scandalous situation in Armenia in distorted and rose colouring, is found out to be well – paid for his “dangerous” job. Moreover, David Harutyunyan’s successes abroad are directly – proportional to his financial successes inside Armenia: year after year David Harutyunyan’s and his brothers’ Vahan and Hayk Harutyunyans’ property increases, and the spheres of economic activities widen. At present David Harutyunyan’s family’s name is connected with a row of businesses: transportation of goods, air tickets, legal consultancy sphere, communication, construction. Besides, though only David Harutyunyan’s brothers’ names are mentioned in the documents of those organizations, everybody knows very well confidentially that Harutyunyan brothers’ patronage is David Harutyunyan, who succeeds in creating more and more favourable conditions for his brothers’ businesses using his official post and governmental relations.

The legal – Consultancy Company called “Harutyunyan and partners”, which does legal – consultancy services for many big companies and individuals having a remarkable biography, belongs to David Harutyunyan and his brothers. “Harutyunyan and partners” particularly defends the interests of some companies realizing building on the North Prospect (including the interests of the company called “Glendale Hills”, the name of which is also connected with Harutyunyan family), “Harutyunyan and partners” is also the legal – consultant of “Vivacell MTS” and “Air Armenia”. One of the partners of this company is also a famous Diaspora Armenian businessman, whose name and surname in Armenia is Grigor Aghabekyan, who is now imprisoned in France accused in child – contamination and devilism. By the way, Vatican has had a strong participation in his imprisonment. Aghabekyan’s real name and surname aren’t known because the latter is known under different names in different Armenian communities. He has the citizenship of the USA, Lebanon, France and Australia, and according to some data, he had completely changed his face and finger – prints with the help of plastic surgery before the imprisonment because of which he had had serious problems when being arrested in France. According to some data, Aghabekyan had once a charity organization through which he took the children “abroad” to have a rest. The following Aghabekyan has also transferred a great amount of money to his Armenian relatives before the last presidential elections in assistance to Serzh Sargsyan: according to some data, it is spoken about 4 million dollars. It is also spoken that the director of Public Television Alik Harutyunyan owes a great amount of money to the above – mentioned Aghabekyan. According to the information in the governmental circles, Aghabekyan was born in Lebanon, became rich during the years of civil war due to the sale of weapons. They also say that a few years ago Serj Sargsyan’s brother – Sashik Sargsyan had some problems in the USA, and the latter solved his problems thanks to Aghabekyan. But it’s not clear under which name and surname Grigor Aghabekyan presented himself then.

Harutyunyan brothers and the scandal of HSBC

Harutyunyan in the Russian Press

A few months ago a row of materials was published in the Russian press about the property of Armenian officials and oligarchs. Particularly, in the material of Russian Wek.ru there was also a reverberation to David Harutyunyan. There was particularly mentioned in the material: “David Harutyunyan is one of the closest and most faithful people of Robert Kocharyan. Harutyunyan has prepared a legal basis for Kocharyan’s all agreements and illegal privatizations, beginning from the privatization of “Armentel”. One of the main sources of his income is the legal office “Harutyunyan brothers”. Taking great honoraria the office makes any verdict in the court real. It was this company which won 1 million dollars from the Greek company OTE (the previous owner of “Armentel”). This was a hidden bribe which OTE gave to Harutyunyan so that the latter didn’t bring any action against OTE in the arbitrage of London. Together with his brother Harutyunyan is considered to be the owner of the company “Cornet”. It was this company which realized the enclosure of the court actions of the owners of many houses situated in the centre of Yerevan. These people were against the elite constructive works on the streets Buzand and the North Prospect. Due to this company not only the legal field of that construction was realized but also the expulsion of the natives of Yerevan from the city centre. The exiled people got an insignificant amount of money and instead the constructive organization belonging to him got right to take part in the elite construction”. There was also mentioned in the material that before the elections of the National Assembly in 2007 the leader of the party “New Times” Aram Karapetyan had announced that David Harutyunyan had a flat in the centre of New York. According to the published material, Harutyunyan hasn’t applied to the court to refute that information. By the way, Harutyunyan hasn’t also anyhow refuted the reality of this material published in the Russian press.
P.S. In the near future we will also present other businesses connected with David Harutyunyan’s name and particularly, the company “Glendale Hills” realizing building.

In the first article of this line we have touched upon only the part of businesses belonging to the leader of the Armenian delegation in PACE, leader of the State – legal committee of the National Assembly, the main weapon in the hands of Armenian authorities on the eyes of international society David Harutyunyan and his brothers. David Harutyunyan is famous for carefully hiding all the criminals done inside Armenia by the authorities of the Republic of Armenia. Besides, David Harutyunyan is also the legal support for all the illegalities done inside the country. That is, this person’s international relations and legal knowledge serve not the country but they are sold to the authorities in principle of services instead of a payment. And the payment received for his services has been given in different ways – money, real estate, and businesses. And the wider is the circle of services done by Harutyunyan, the more become the number of businesses belonging to the latter’s family.
In the previous article we had touched upon the activities of “Air Armenia”, “Globe Travel”, the legal – consultancy company “Harutyunyan and partners”. Now we’ll touch upon the other spheres of Harutyunyans’ businesses.

P.S. Here is the person, who is actually responsible for the arbitrary legislative changes done during his officiating years, for the collision of the Justice system and degeneracy, for being accessory to not having revealed the murder of March 1, for hiding the names of real sinners, for having political prisoners and also for the documents against Armenia adopted in various international organizations, because, while being appointed to prevent the appearance of such documents, David Harutyunyan is only busy with hiding the crimes committed by the Armenian criminal authorities.