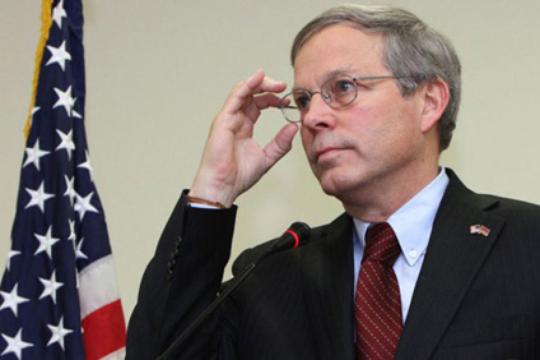 Ambassador Heffern in Glendale met with representatives of SDHP

The delegation of Social Democratic Hnchakyan Party (SDHP), headed by Vazgen Khostanyan, in Glendale city met with US Ambassador to Armenia John Heffern.
The delegation expressed concern over the slow progress of political reform and economic injustice in Armenia and asked US to be more attentive on the situation which is in Armenia.
The Ambassador, in his turn, assured that US knows its foreign policy and will do everything possible to make developments in Armenia.
While talking on Nagorno-Karabakh conflict, the delegation stressed that Azerbaijan’s actions, especially connected with honoring of Ramiz Safarov, is not acceptable and it puts tension for solving the conflict in peaceful way.
Heffern stressed that he agrees with it and also added that Turkey must open the border with Armenia without putting any circumstances in front of Armenia.
The source also informs that the delegation was concerned about Syrian-Armenians and asked Heffern to comment on the situation.
According to Ambassador, the situation in Syria is on the center of attention of US and added that they will do everything possible to prevent the clashes.