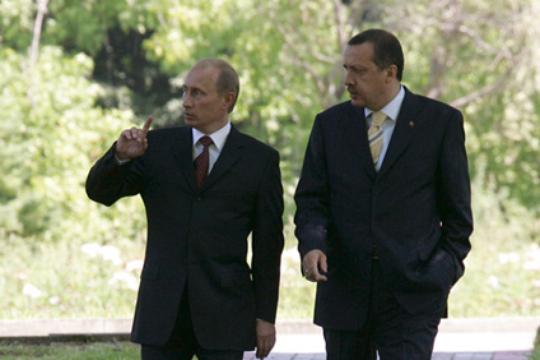 Putin’s visit: What to do with him?

Emre Uslu from Turkish Zaman touched upon Putin’s visit to Turkey. Find the article below.
Russian President Vladimir Putin is finally coming to Turkey. Originally this visit planned for Oct. 14-15 was postponed.
It was announced that Putin was going to visit Turkey for a meeting of the Turkey-Russia High Level Cooperation Council, which was established in 2010 to boost economic and political ties between the two countries.
The Russian side back in October revealed that the visit was delayed upon Putin’s request, but the reason for the delay is still unknown. Although the parties did not officially confirm, it is no secret that the visit was delayed largely because of the disagreement between Turkey and Russia over Syria.
Back in October, the Turkish-Syrian crisis was at its peak after Syrian shells killed five Turkish citizens on Oct. 3 in the border town of Akçakale. As expected, Erdoğan raised his voice against Syria after the deaths, but Russia continued to support Syria. Under these circumstances the Turkey-Russia High Level Cooperation Council was not able to produce its expected results, which further deepened the rift between Russia and Turkey.
It seems that diplomats from the two countries considered the timing of the visit was not right and thus delayed the visit. In the month of November, the crisis continued between Syria and Turkey, but, compared to October, Erdoğan lowered his tone against the Syrian regime.
Does it mean that there is now a window of opportunity for reducing the tension between Turkey and Syria? Could Russia play a constructive role in this?
A week ago Russian Foreign Minister Sergey Lavrov stated, “Turkey should negotiate with Syria.” This statement was a diplomatic move before Putin’s visit to Ankara — testing the water to see whether Turkey was ready for negotiations with Syria.
Turkish Foreign Minister Ahmet Davutoğlu quickly closed the doors of negotiation with Syria, which Lavrov attempted to open, and sent a clear message to Russia that if the Russian president offers such mediation between Turkey and Syria, Turkey will say no.
Davutoğlu said: “Turkey does not want to take sides in the Syrian crisis. What Turkey is doing is not taking a side against Syria. Turkey rather takes the side of humanity against a dictator who is massacring his own people.”
With this statement, Davutoğlu sent a signal to Russia that Turkey would not come to the table to negotiate for peace between the Bashar al-Assad regime and Turkey. Further, Davutoğlu put the threshold so high before Putin comes to Ankara in order to gain moral ground in the negotiations.
Certainly, it was a clever move for Davutoğlu to gain moral ground by putting the Russians on the side of a dictator, pushing Russia into a corner before Putin visits Ankara.
The Russian side read Davutoğlu’s intention correctly and responded to Ankara by issuing a statement. Russian Foreign Minister Sergey Lavrov told the media the “our military and technical cooperation in the Middle East is related to our efforts to maintain stability in the region. In the Syria region we are not on the side of any party.”
Lavrov further stated that “we all should work together and convince parties to sit down at the negotiation table. The Syrian people should decide their own future.” He then implicitly criticized Turkey by saying, “Instead of negotiating with the Syrian regime, Turkey struggled against the Assad regime … which makes Syrian people’s lives worse day by day.”
Further, Russia has another concern. That is Patriot missile installations in Turkey. Russia’s major concern is whether the missiles are part of NATO’s compact defense system, which was brought to Turkey as part of previously installed NATO radar systems.
Given the fact that it was Russia who harshly criticized Turkey — when it was revealed that the Patriot missiles are to be installed in Turkey — indicates that Russia has serious concerns over NATO’s defense systems in Turkey.
Such diplomatic exchanges between Turkey and Russia before Putin’s visit will make for a very interesting visit. But will Turkey and Russia get any tangible results from this visit?
The plain answer for this is no. However, parties will improve economic relations while confrontation in the political arena continues.