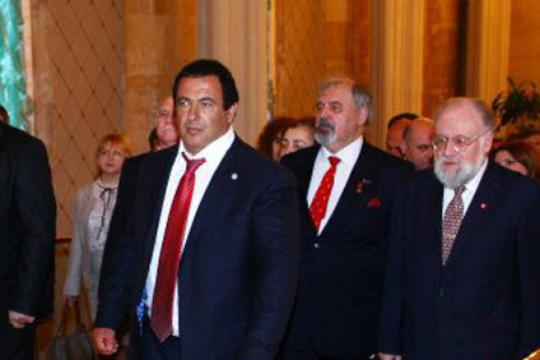 A complementary factor out of the Russian stick

Musa Mikayelyan in his political analysis talks about the confirmation of the PAP delegation visit to Brussels with Gagik Tsarukyan. Mikayelyan reminds Tsarukyan previously mentioned he would tell about his decision from 1-5 of December.

As Mikayelyan deduces, Tsarukyan will make his announcement after the 6th of December which means he will think of the final decision throughout the meetings in Brussels. It is not clear whether Tsarukyan, who is a vivid follower of the Russian political elites wants to elaborate his “complementary” strategy including Brussels into the political processes of Armenia.

Mikayelyan states it is very important who Tsarukyan is going to meet in Brussels. It was not clear until 3rd of December whether the head of the PAP will lead the delegation to Brussels because it was still unclear who he would manage to meet.

Mikayelyan concludes, the PAP most probably managed to organize meetings with high representatives and that was the reason Tsarukyan agreed to leave with them. Besides, the official representative of Armenia to Brussels is Avet Adonts – a former PAP MP. It is of no doubt Adonts complemented for the agreement to meet Tsarukyan and it is also obvious official Yerevan approved this. Mikayelyan believes this is quite suitable for the official Yerevan to turn from the Russian “stick” policy to a more “complementary” one.