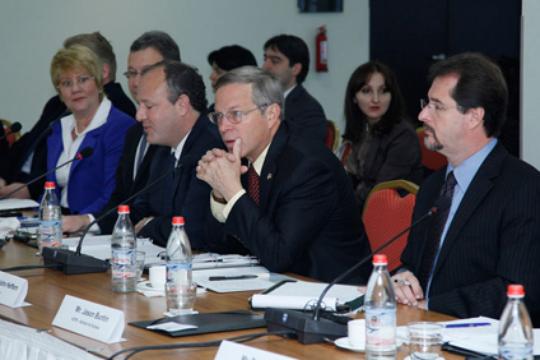 US-Armenia trade levels are on the decline. Asbarez

Asbarez writes that since Armenia and the European Union inch closer to a comprehensive free trade agreement, pledges by the Obama Administration to foster expanded U.S.-Armenia trade remain unfulfilled.
No meaningful movement in this realm has been made since the new US Ambassador to Armenia John Heffern began his tour more than a year ago, despite his own promises to prioritize bilateral economic relations.
The source informs that Ambassador Heffern travels to the US and is scheduled to meet with Armenian-American leaders in Los Angeles, San Francisco, Boston and New York.

While Ambassador Heffern is clearly not the Administration’s decision-maker on the Armenian Genocide or the Nagorno-Karabakh issues, and can legitimately seek to defer certain complaints regarding the US government’s shortcomings in these areas to those at a higher pay-grade, he is America’s primary representative to Yerevan, and the US’s point-person on the growth of U.S.-Armenia bilateral relations.

Instead of progress, the Embassy, White House, departments of State, and the Treasury simply talk about process, with predictable results: US-Armenia trade levels are on the decline. According to U.S. government figures from the Census Bureau, while the bilateral U.S.-Armenia trade level in goods was $194.1 million in FY2010 and $183.6 million in FY2011, over the course of Ambassador Heffern’s first twelve months in office, it dropped to $160.7 million, roughly a 12.5 percent decrease, despite a generally improving U.S. economy.
While it is too certainly early to draw complete conclusions regarding his full tenure, the trends are troubling. All the more so because of the public promise that President Obama made to foster Armenia’s development through expanded trade, and Ambassador Heffern’s own commitments, during his confirmation process, to prioritize the growth of U.S.-Armenia economic relations.
Armenian-American community must encourage Heffern to take concerted steps to realize the full potential of his office to grow U.S.-Armenia ties.