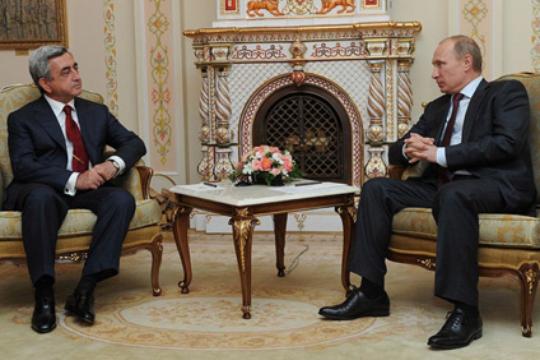 Russians playing closed at this time?

Yesterday, we have learned from Nikolai Ryzhkov that RF President Putin will visit Armenia in early 2013. How real is this information in comparison with the other unimplemented ones we don’t know?
However, as writes Eghiazar Ayntaptsi in his political analysis, Putin will not come before March, as the presidential election campaign starts in mid-January, 2013.

According to Ayntaptsi, Putin will refrain from visiting Armenia in that period, although Serzh Sargsyan, for example, would not mind receiving him those days, and show everyone that he has Putin’s approval, as it is a political trump card in Armenia.

“In other words, Putin will visit Armenia after the election to congratulate the winner of the presidential elections in 2013. In this aspect of Putin’s visit to Armenia will actually will be post-election developments indicator. If the RF president, however, decides to visit Yerevan by the end of the presidential election, then this will mean that Russia will remain neutral to provoke or instigate the post-election unrest, which could be done by the ANC-PAP alliance. Otherwise, Russia probably does not try to directly intervene in inter-Armenian developments, but try to orientate according to the situation between them the participants.”

The reporter notes that Putin does not want his name to be used in Armenia’s internal struggle. Of course, regardless of his visit, Armenian political thinking in stereotypes and perceptions cannot pass without Putin.

“This also seems to be evidence that Russia is willing to play without noise or closed and without showing any preferences.” concludes Eghiazar Ayntaptsi.