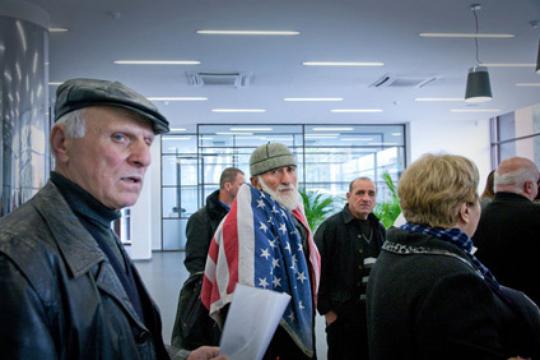 The New York Times touched upon new policies of Georgian government. Find the article below.

These days, when the Georgian prosecutor’s office opens, people are lined up, clutching plastic bags full of documents. One after another, they are presenting their case that President Mikheil Saakashvili’s government stripped them of something: a state job, a piece of land, an apartment. Most of them want to see someone punished.

The promise that officials would be punished helped propel the billionaire Bidzina Ivanishvili to victory in October parliamentary elections, dislodging the group of politicians who had controlled Georgia for nine years. Mr. Saakashvili conceded the loss and agreed to enter the opposition, and for the first time in Georgia’s post-Soviet history, power changed hands legally.

About two months later, the Georgian experiment — to many in the West, a last hope for building democracy in inhospitable post-Soviet terrain — hangs in the balance.

Mr. Ivanishvili has embarked on the project of prosecuting former officials more swiftly than anyone expected, saying he cannot ignore the public’s demand for justice. But numerous cases are targeting political rivals, since Mr. Saakashvili remains president until next October. The authorities have already charged 23 officials from Mr. Saakashvili’s government with crimes like corruption and torture, and they may prosecute his former interior minister, who is also the leader of the Parliament’s main opposition party.

“In Georgia, the political enemy is an enemy. I don’t think it gives a very good image to this country, but it is our culture,” said Mr. Rondeli, president of the Georgian Foundation for Strategic and International Studies. “It’s clear now that the new political force wants to annihilate the previous one. So that is completely clear. It does not look very much like democracy, but they say that the rule of law is higher.”

It was apparent there would be some kind of legal reckoning if Mr. Saakashvili lost power. Though his government was embraced in the United States and Europe for its pro-Western orientation, complaints mounted at home, especially about police brutality and the lack of due process in the justice system.

This fall, video was released showing prison inmates being beaten and sodomized by guards, releasing a huge wave of public anger. Rights activists have long complained that officials acted with impunity in grave cases, like the death of Sandro Girgvliani, a bank executive who was abducted by law enforcement officers in 2006 after an altercation.

As a candidate, Mr. Ivanishvili promised to deliver justice swiftly, sometimes claiming he could create an independent court system in as little as a year. Asked how, he told Forbes, “You have to jail one minister — two, max — to show everyone that there will be no forgiveness. Show that there’s political will up there, and it will all line up quickly.”

Georgia’s new prosecutor, Archil Kbilashvili, said that more than 3,000 criminal complaints had been filed against former officials over the last month, and he planned to triple the number of investigators in the division handling misuse of authority. If there is a criticism he hears most often from Georgians, he said, it is that he is acting too slowly.

As an example, he offered the case of Bacho Akhalaia, a much-feared former defense and interior minister who fled the country after the elections, evidently expecting to be arrested. When news got out that Mr. Akhalaia had returned, Mr. Kbilashvili said, he had been in his job for just five days when he was inundated with “many, many phone calls” asking why he had not ordered Mr. Akhalaia’s arrest.
“I said I have no evidence against him, he is a free citizen of this country,” Mr. Kbilashvili said. Still, the next day, Mr. Akhalaia was arrested based on the relatively mild charges of striking a sergeant with a knife handle and publicly beating servicemen. After that, new allegations began to flow in from citizens who were “somehow encouraged” to testify against Mr. Akhalaia, Mr. Kbilashvili said.
Two prominent legal rights groups have already warned that Mr. Ivanishvili’s team is approaching questions of justice too hastily. Tamar Chugoshvili, of the Georgian Young Lawyers’ Association, said her group withdrew from a parliamentary effort to compile a list of political prisoners for release, because a two-week deadline made it “impossible to really study the cases in detail.”

“What we see is that they are in a real rush, they are trying to do things very quickly,” she said. “I understand that they have a political responsibility in front of voters, but I think they are doing it wrong.” She said it was too early to judge whether former officials were receiving due process, but said it was “very important that we should see a just process, and a high standard of proof.”

This week, the inquiries seemed to tilt toward high-ranking figures around Mr. Saakashvili. Investigations were opened into the cases of Mr. Girgvliani and a former prime minister, Zurab Zhvania, whose 2005 death from carbon monoxide poisoning has long been the subject of rumors.

As the campaign accelerates, Western leaders have rushed to intervene, warning Mr. Ivanishvili that acts of political retribution could jeopardize Georgia’s path toward NATO membership. But those warnings have served to annoy Mr. Ivanishvili’s supporters, who say Western governments enjoyed a cozy relationship with Mr. Saakashvili and shut their eyes to his government’s rights violations.
“We perfectly understand that there is some cliché that everything in Georgia was perfect, and that the outcome of this election was a surprise to the international community,” Mr. Kbilashvili said, when asked about warnings from the West. Mr. Ivanishvili himself was clearly angered by a critical editorial that appeared in Wednesday’s Washington Post, and said at a news conference that it had been placed by Mr. Saakashvili’s lobbyists.

It was a tense week for officials from Mr. Saakashvili’s team, who woke every morning awaiting news about further arrests. Vano Merabishvili, the former interior minister and head of the United National Movement, was half-expecting the prosecutor to call him in for questioning on a minor charge related to Mr. Girgvliani’s death. In a conversation that was punctuated with brittle laughter, he said he would return to politics even if he were sentenced to a prison term. “I am young enough to wait 15 years, or 20 years,” he said. “I will be 65 years old if I am released after 20 years.”

In Tbilisi, it is rare to find citizens who do not support the idea of prosecuting departing officials. Maka Mujerishvili, 31, was a rare dissenter, saying she feared the campaign could get out of control. “They are now repeating everything they were fighting against,” she said of Mr. Ivanishvili’s team. “I think our Georgian public is making a mistake. They are looking for revenge. But I think it is taking us backward.”

Nikoloz Bezhanishvili, a mechanic, showed up at the prosecutor’s office on Tuesday, smoothing out the papers that he had brought to the capital from his village. They showed a narrow sliver of land that he said had been shaved off by an assessor linked to Mr. Saakashvili’s party.

This, he said, was why he had voted for Mr. Ivanishvili, so that, as he put it, “truth would be restored.” Asked what would happen if the land was not returned to him, his look was grim. “Then there is no hope for Georgia, and it is better to leave the country entirely,” he said.