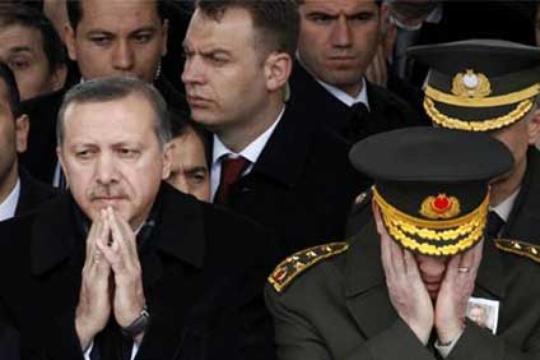 Klaus Jurgens from Turkish Zaman touched upon Turkey’s democratization in association with the country’s European aspirations. Find the article below.

Turkey’s relationship with Europe is not just about the country’s ongoing (or dare I say dragging on) EU accession process.
There is another, often overlooked, dimension that has grown quite considerably in proportion over the past decade or so. I am referring to Turkey’s participation in the Strasbourg-based Council of Europe and the benefits of that relationship.

Of seven joint projects currently under way in Turkey, one in particular stands out. An undertaking aimed at democratic citizenship and human rights education, or, as it is more commonly known since the recent adoption of a communication strategy document, “Generation Democracy.”

First — what are the other six projects about?

The Council of Europe (www.coe.int) has a different function and different tasks from the EU. Democracy, human rights and the rule of law are some of the organization’s key areas of work. Education forms part of its agenda, too. Adrian Butler, head of the Council of Europe program office, whom I had the pleasure of meeting in Ankara, explained to me that he and his team are in charge of carrying out joint projects; it is not to be misunderstood as a consular or other diplomatic mission. Turkey is, of course, a full member of the council. In addition to Generation Democracy, Mr. Butler’s office is currently implementing six other projects in Turkey, of the 43 in total that have either been completed or are in progress here. They involve working with officials from the Supreme State Council on matters related to court management, prison reform, military justice, criminal justice and ethics.

For example, a project called “‘Enhancing the Role of the Supreme Judicial Authorities with Respect to European Standards” will have approximately 500 participants from Turkey. They include members of four Turkish high courts (the Constitutional Court, the Supreme Court of Appeals, the Council of State and the Supreme Board of Judges and Prosecutors [HSYK]) as well as reporter judges, the administrative justice judges who assist the Ministry of Justice and various committees and divisions of the courts; and prosecutors and judicial inspectors, who will have the opportunity to visit Strasbourg and The Hague to learn established best practices. International cooperation is also evident in a project related to military judges that allowed 14 Turkish core project trainers to visit Arnhem, in the Netherlands, and Strasbourg to develop their own training programs for Turkey.

Whereas some of the Council of Europe’s work in Turkey allows Turkish target groups to look over the shoulder of European partners, other projects are mostly implemented at home. “Prison Reform” is a project where a total of 90 participating prisons had 15,000 (!) prison staff trained locally with the guidance of 349 experts who had been prepared for their task here in Turkey by Council of Europe-nominated coaches in a “train the trainers” program. One overarching goal is to significantly reduce the number of pending and future court cases brought before the European Court of Human Rights (ECtHR). In one instance, a landmark ruling in Strasbourg on the hotly contested topic of property rights in Turkish forests has already helped to clear more than 200 cases. It was decided that there was no violation of either European or Turkish law and the cases were dropped.

There’s no better way to start teaching about democracy than at Turkish schools, or is there? When what is often referred to as the triangle — parents, teachers and the school, and the children — is part of a project of such huge proportions, it allows various segments of the public from many different age groups to benefit. Actually, Generation Democracy is all about this kind of active participation. How can it be measured? By the expected success of a new mandatory course at primary school level and other (elective) options at the secondary level that are about to be inserted into the Turkish school curricula. “Re-inserted” would actually be a more appropriate term.

Back in 1924, the newly founded Republic of Turkey established a one hour per week class about moral values at Turkish schools. Two years later, in 1926, citizenship also became part of the official school curricula. Classes lasted for two hours per week and were offered to fourth and fifth graders. By 1968, however, no classes about citizenship, or any other elective courses for that matter, remained. It was not until the 1995-1996 academic year that a one-hour course about citizenship was re-offered, this time to slightly older pupils, seventh and eighth graders. Ten years later the course was again removed from the curricula because human rights education was to be integrated into all subjects taught (perhaps with the exception of mathematics and life sciences). During the academic year 2010-2011, a one-hour elective course was re-inserted into the secondary school curricula. Now, it seems that Turkey and the Council of Europe have (hopefully) found common ground to finally find a permanent solution.

Earlier this year, I participated in the official launch of the Generation Democracy project. It is not just a joint venture between the council and Turkey, but also depends on pre-accession financing from the EU. If I understand the project’s raison d’être correctly, it is much more than simply re-inserting the same on-again, off-again citizenship topic into the Turkish school curricula with a new course and new textbooks. Instead, Generation Democracy is about values and attitudes in general terms. Seen in the context of Turkey’s educational reform process, this project could be characterized as a pillar of progress.

During the Ankara launch event, it was stressed that education should not be misinterpreted as simply preparing young people for entry into the labor market. One could argue that democratic (school) culture is not like riding a bike, but more like a language: Without practice we will forget how to do it.

Learning from best practices to making one’s own — Turkey’s, that is

Some months after the launch I decided to inquire about the status of the pilot phase of the project. I went to Ankara at Mr. Butler’s invitation, and we were joined by David Kerr, Generation Democracy’s key international expert, Sarah Keating-Chetwynd, the council’s head of the unit for regional and bi-lateral cooperation in southeastern Europe at the council’s headquarters in Strasbourg and Turkey Project Team Leader Emir Adzovic. According to Mr. Kerr, the content of citizenship and human rights coursework is not just what most would assume, but we should also think about global warming, migration issues, new technologies, an aging society and so on. “Respect” would become a keyword. I learned that Generation Democracy began in 1979 in Strasbourg. It evolved over several cycles, including trying to find solutions to the various council member-states’ needs and expectations. It took a decade to come up with today’s plan for new courses to be taught and to introduce the culture of democratic governance at Turkish schools.

It is now the largest project of its kind in Europe. Eleven primary and 11 secondary schools are the pilot locations for the current academic year 2012-2013. Over the course of three years, and closer to the end of the project’s lifecycle, models will be developed for democratic governance and citizenship classes not just at primary and secondary schools, but for vocational schools and universities, too.

Ms. Keating, who had come to Turkey to participate in the project’s steering committee proceedings, then explained the roadmap that led to Generation Democracy. She said that Ankara’s program office works with everyone from young children to the country’s top judges but regretted the fact I noted earlier: All of this has so far taken place mostly unbeknownst to the general public. She hopes that Generation Democracy is going to change this and make the council more visible as a peace-building and education-sponsoring institution, as well as make the Turkish curricula better.

It was stressed that Generation Democracy has four key components: the citizenship and human rights course development and implementation, installing a more democratic culture and governance at schools, helping the Turkish Ministry of Education to build additional capacity and of course, last but not least, to involve parents and teachers as key stakeholders in all of this, rather than just the children attending the new course.

Having greatly appreciated my meeting partners’ extensive insight into and knowledge of all things related to human rights and education, my personal reflections are that, as needed as it is, one mandatory or additional elective course on citizenship and human rights will not change a nation’s democratic culture overnight. A related milestone, yet not one inherent to the project, would be the adoption of a truly civilian constitution for the Republic of Turkey. Waiting for those children who will benefit from the new citizenship classes to enter adult life and become decision makers would take too long; it is today’s elected politicians who should speedily conclude work on a consensus-based civilian constitution. Then all will fall into place and Turkey’s future generations will enjoy and learn how to protect democracy. The Council of Europe-EU-Republic of Turkey joint venture is nevertheless a perfect tool to achieve just that. May I, with all required commentator’s modesty suggest, “More such initiatives, please?”