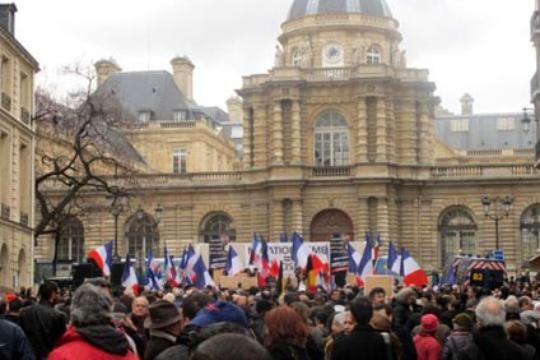 Radio Liberty Armenia reports that a French-Armenian community leader has expressed concern that public opinion in France does not favor a new law criminalizing denial of the Armenian genocide.

Hilda Tchoboian, former president of the Brussels-based Euro-Armenian Federation, in her interview with RFE/RL’s Armenian Service on Friday said that proceeding with new legislation on that after seeing the previous law annulled by the Constitutional Council will require more than the opinion of the French president. “Public opinion needs to be changed and the Armenian community has tremendous work to do ahead,” she said.

The previous law initiated under the previous administration of President Nicolas Sarkozy to punish anyone who publicly denies that the Ottoman-era massacres of more than a million Armenians constituted genocide was passed by both houses of the French parliament in late 2011, early 2012. But the measure was later rejected by France’s highest court as “unconstitutional”. Francois Hollande, who was elected president of France last May, has repeatedly assured the country’s influential Armenian community that he remained committed to enacting a new law in that regard.

References to the process were also made during the three-day official visit of Armenian President Serzh Sarkisian to France earlier this week. In particular, during a meeting with Hollande at the Elysee Palace on Monday Sarkisian thanked France’s government and people for their stance on the affirmation of the Armenian Genocide. He added that he was aware of Hollande’s position on the new bill regarding the Armenian genocide.

Agensy reports that meanwhile, Tchoboian talked about “huge problems” with French public opinion that the Armenian community of France encountered when the measure was first introduced in the National Assembly and later in the Senate.

“Scholars, media were up in arms against the Armenian community. There is a whole movement in France that deems that history should be left to historians and that laws must not be adopted in regards to historical events,” the French-Armenian leader explained. “This work is very important. Public opinion has to be prepared before the president sees an opportunity and agrees to reintroduce the bill.”

Tchoboian said that eventually she expected the French leader to make good on his election pledge regarding a new measure on the Armenian Genocide, but she wouldn’t speculate on particularly how and in what form that will happen.

France officially recognized the 1915 mass killings and deportations of Armenians in Ottoman Turkey as genocide in 2001. The move angered Ankara, which has also strongly opposed all subsequent attempts to reaffirm that recognition by introducing penalties for denial.

Ankara recalled its ambassador from Paris and threatened to sever political, economic and military ties with France after the new law regarding the Armenian Genocide was passed by French lawmakers in December-January. Relations between France and Turkey began to thaw after the measure was canceled by the court before being signed into law by then French President Sarkozy.

Since then both Sarkozy and his successor Hollande vowed to redraft the bill.

Last summer leaders of the 500,000-strong Armenian community of France expressed concerns over remarks by a senior member of the Hollande government who called into question the prospect of a new French measure outlawing denial of the Armenian Genocide. At a joint press conference in Paris with his visiting Turkish counterpart in July, French Foreign Minister Laurent Fabius said such a law was unlikely to be revived. President Hollande, however, was quick to reassure the French Armenians on his commitment to the process.