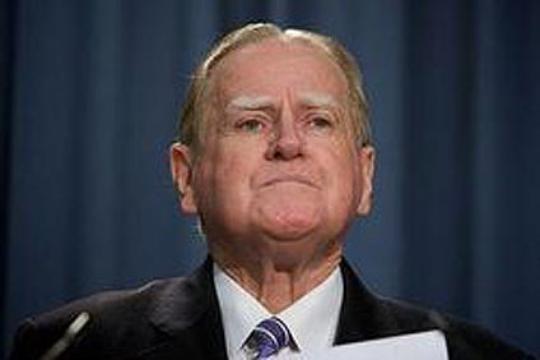 The press service of ANC Australia issued a press release according to which the Honorable Reverend Fred Nile, a New South Wales Member of the Legislative Council, has remained steadfast in his support of the Republic of Nagorno Karabakh.

In a powerful speech delivered in the NSW Upper House, Nile pledged his “firm support to the right to self-determination for the Republic of Nagorno Karabakh and call upon all nations to uphold this basic human right.

He said: “Our actions today can prevent another genocide of Armenians.”

In his address, Nile also condemned a recent quote by Azeri President, Ilham Aliyev, stating: “Our main enemies are the Armenians of the world.” Nile also touched on the pardoning by Azerbaijan of axe murdering soldier Ramil Safarov, who brutally killed an Armenian soldier while he was asleep during a NATO exercise.

On October 25th, 2012, the Legislative Council of New South Wales adopted a unanimous motion recognising the Republic of Nagorno Karabakh and calling on the right to self-determination of its people. This historic motion was the first in Australia and the third internationally.

“We are grateful to Rev. Nile for his ongoing support for Armenia, Nagorno Karabakh, and the Armenian people. He continually upholds and defends human rights for the betterment of mankind,” remarked ANC Australia Executive Director Vache Kahramanian.

The text of the statement can be read below:

Reverend the Hon. FRED NILE [10.17 p.m.]: I am pleased to add my support to an issue of importance not only to the Australian Armenian community but also to those who struggle for the basic human right of freedom and self-determination worldwide. These points were made to me during the recent annual Armenian gala dinner. The Armenian people have been subjected to some of darkest chapters in modern history.

In 1915, as our Anzac soldiers were fighting on the shores of Gallipoli, more than 1.5million Armenians were being massacred under a systematic genocidal campaign by the Ottoman Empire. In the midst of such horrific carnage Armenians rose to form the first independent Republic of Armenia on 28 May 1918. However, this was not to last as Armenia was swept into the vacuum of the Soviet Union. Although the perpetrators of the Armenian genocide were never punished for their crimes against humanity, Armenians today continue to struggle for basic human rights in the Republic of Nagorno-Karabakh, which is located at the eastern end of the Armenian plateau.

Historically, this country was constituted as part of Greater Armenia from as early as 600 BC. Although ruled by various empires throughout history, the people of Nagorno-Karabakh—which is an ethnic Armenian enclave—were faced with astark future when Joseph Stalin gifted Nagorno-Karabakh to Azerbaijan on 5 July 1920. Over the next 70 years the Armenian population of Nagorno-Karabakh faced devastation at the hands of the Azerbaijan Soviet authorities that was akin to the persecutions suffered by Armenians during the 1915 genocide.

Upon the dissolution of the Soviet Union in 1991, Armenia re-established itself as a republic on 21 September. However, during these historic times the Armenians of Nagorno-Karabakh were facing their darkest period.

After years of persecution, including massacres and pogroms, the Armenian people of Nagorno-Karabakh held a referendum on 10 December 1991, which resulted in adeclaration of independence. This led to Azeri forces launching an all-out military assault against the civilian Armenian population of Nagorno-Karabakh, which resulted in the loss of tens of thousands of innocent lives. The war, which continued until 1994, ended when the Organization for Security and Cooperation in Europe brokered a ceasefire agreement between Armenia and Azerbaijan. Although the ceasefire has remained in place and the Organization for Security and CooperationMinsk Group, which is chaired by the United States, Russia and France, continues to negotiate for a peaceful final settlement, Azerbaijan consistently violates the ceasefire on almost a daily basis.

Between 2006 and 2011, Azerbaijani ceasefire violations along the Armenia and Nagorno-Karabakh border increased by more than 2,100 per cent. According to the figures I have, Azerbaijan had already violated the ceasefire regime 6,000 times during the first five months of 2012. These figures indicate that Azerbaijan has nointention of resolving this longstanding dispute peacefully. In November 2011 Radio Free Europe reported:

International mediators have repeatedly called for both Armenian and Azerbaijani forces to withdraw snipers from the area. UN Secretary-General Ban Ki-moon added his voice to those calls in a statement issued in September 2010.

Armenia and the Republic of Nagorno-Karabakh have agreed, but Azerbaijan continues to oppose the proposal. According to the Stockholm International Peace Research Institute in 2012 there was an increase of well over $2 billion a year in Azerbaijan’s annual military spending over the past decade. In October 2010 Radio Free Europe reported the growth of military expenditure in Azerbaijan from $1.59billion in 2010 to $3.1 billion in 2011, which is 20 times larger than the budget ofeight years ago. Among the countries of the former Soviet Union only Russia spendsmore money on its military.

In this day and age we are fortunate to live in a country like Australia and at times wetake the basic human rights of peace and liberty for granted. This ideal is a constant struggle for Nagorno-Karabakh, especially when comments such as “Our main enemies are the Armenians of the world” are made by the President of Azerbaijan, according to his presidential website.

In 2004 during a North Atlantic Treaty Organization [NATO] Partnership for Peace program in Budapest, Azeri Lieutenant Ramil Safarov murdered his counterpart Armenian Lieutenant Gurgen Margaryan in his sleep by nearly decapitating him with an axe. Safarov was eventually repatriated to Azerbaijan and treated as a hero and promoted to the rank of major. I give my firm support to the right to self-determination for the Republic of Nagorno-Karabakh and call upon all nations to uphold this basic human right. Our actions today can prevent another genocide of Armenians.