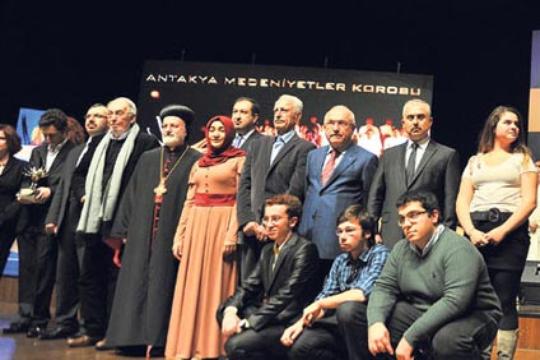 Turkish Today’s Zaman daily writes that a group of students from a Turkish high school and an Armenian high school have joined hands to get to know each other and develop bonds of brotherhood among different religious and ethnic groups in the country with a joint project, which has resulted in a prominent award from the Journalists and Writers Foundation (GYV).

As reported, students from the Mümtaz Turhan Social Sciences School and the Private Getronagan Armenian High School were last Sunday granted the Exemplary Behavior and/or Initiatives in the Public Sphere Award by the GYV at a spectacular award ceremony held at the İstanbul Congress Center for their outstanding project called “Aşure/Anuşabur.”

The group of Turkish and Armenian students launched the project that saw them travel across Turkey to meet other cultures and see if they could help foster a more peaceful coexistence between different groups in the country.
Hanne Betül Bolluk, an 11th grader at the Mümtaz Turhan Social Sciences School, told Sunday’s Zaman that she and her friends decided to do something to better know Armenians who have been living in Anatolia for years after Fethiye Çetin, a lawyer who is affiliated with the Armenian community in Turkey, came to their school last year for a talk to introduce her book.

She said they contacted the Agos newspaper, an Armenian daily published in Turkey, to discuss what they can do and came up with the idea of meeting a group of students from an Armenian school, which ended up being the Private Getronagan Armenian High School in İstanbul’s Karaköy neighborhood.
“Personally, I was like the living example of the official ideology taught at schools. But my friends and I put everything aside because we knew that counting the number of people [who died in the 1915 incidents — both Turks and Armenians] would not bring any good. We just came together to understand each other’s pain,” Bolluk said.