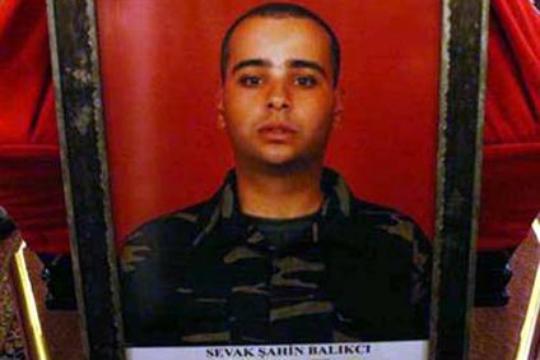 How Turks treat Armenians in Turkey?

Turkish Today’s Zaman writes that the family of a young man of Armenian descent shot dead by a fellow private while performing his military service in Batman has told the court in the murder trial that the verdict will show whether or not Turkey sees its Armenian population as “the other.”

Note, three weeks before his service in the Turkish military ended, Private Sevag Sahin Balikci, 25, was shot and killed in his army unit stationed in Gumusorgu, near the Kozluk district of Batman province, in southeastern Turkey. The incident happened on April 24, on the 96th anniversary of the Armenian Genocide. At that time Turkish Anadoulu Agency reported that Sevag was shot after another soldier’s gun accidentally went off while they were joking around with each other.

“I don’t believe that my son died by an accident on April 24,” said Sevag’s mother, Ani Balikci adding “The statement about the accident doesn’t mean anything to me because preventing these accidents is the duty of those who are in charge there. I need an explanation from the Turkish Armed Forces,”
The Diyarbakir 2nd Air Force Command Military Court is hearing the trial, the ninth session of which was held on Monday, when a quarrel broke out between the accused and Balıkçı’s family. Republican People’s Party (CHP) Deputy Chairman and CHP Diyarbakir deputy Sezgin Tanrıkulu were in attendance at the hearing.

Ani Balıkçı, the victim’s mother, was the first to be heard by the court. “Your decision will show whether we (Turkish Armenians) are ‘the other.’ This is all I would like to say,” she stated.

İsmail Cem Halavurt, a lawyer for the Balıkçı family, requested the court reject a defense application for a media ban on the hearings, stating to the court: “If there is a press ban in this court, will Turkey stop talking about the Armenian issue? Or will people not talk about deaths in the army? This is why we demand that the press ban be overruled. Even if we don’t like certain thoughts, we should treat them as part of free speech in a democratic society.”

İbrahim Gök, a defense lawyer, claimed that the co-plaintiffs and their attorneys were attempting to remove the trial from its legal context and drag it onto the political stage. “The [plaintiff] has asked political parties to monitor the file. There is nothing that concerns political parties here. We should not drive the topic out of the legal context. I don’t think there is an Armenian problem in Turkey. It is wrong to connect this case to the 1915 incidents. There is no Armenian problem in Turkey. We should stick with the real issue here. This is why we want a press ban. We are of the opinion that there is an attempt to politicize the trial.”

Yalçın Torun, a lawyer for Sadrettin Ersöz, a noncommissioned officer facing charges of negligence, also called for an overrule of the press ban, saying closing the court to the media could foster needless suspicions. He further requested that the prosecution file a criminal complaint against Kenan Üzyetici, commander of the Gümüşgörgü gendarmerie station, over his alleged negligence in the incident.

The court also filed charges against Halil Ekşi, a private who has changed his testimony on the incident several times, and Bülent Kaya, an uncle of the defendant, who has been accused of threatening Ekşi to influence his testimony. The request for a media ban was rejected.