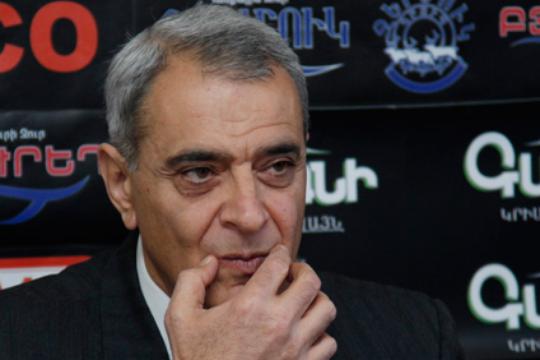 There will be a voting, not an election. David Shahnazaryan

David Shahnazaryan, a politician, stated that the inter-political state of the country is exceptional today. On the one hand we see the Republican party with its criminal-oligarchic clan, on the other hand – PAP with the same characteristics.

He emphasized after the parliamentary elections the political aim was to have a marginalized two-party political system in the country. As followed from Shahnazaryan’s arguments, the public is neutral towards the upcoming political processes because two sides of the struggling for the political power are characterized as oligarchic. Shahnazaryan rejected ANC activity as a separate political entity does not exist as such and the political decisions are made “in the West” before having their implementation here.

Shahnazaryan also thinks Armenia’s joining to the Eurasian Union is aimed at handing the executive body leverages into Russia’s hands which implies Russia’s control over Armenia-NATO relations. As the analyst states, Armenia is ready to accept Russia’s political demands but not ready to hand in its executive leverages to the latter. According to the politician, Moscow’s mistake is that it does not consider today’s oligarchic system’s limited possibilities dealing both with EU and NATO. Shahnazaryan hopes the time for the civil society to make the cardinal political change has come.