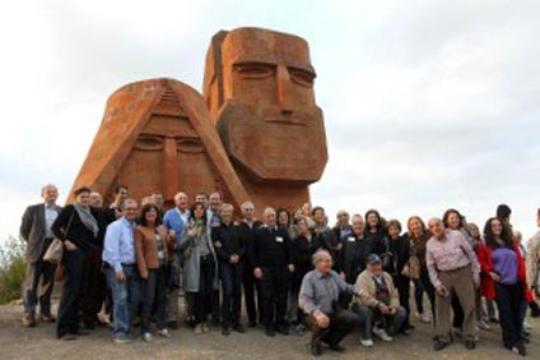 The Armenian Mirror Spectator reports that on Sunday, October 14, Armenian General Benevolent Union (AGBU) delegates and guests, under the leadership of AGBU President Berge Setrakian, left for a three-day trip to the Republic of Nagorno Karabagh (NKR or Artsakh). They had a chance to get acquainted with NKR’s social-economic situation and local AGBU projects, met with public figures, and visited Shushi and Gandzasar.

On the next day AGBU delegates met with President Bako Sahakyan and members of the NKR government. As reported, Sahakyan welcomed the AGBU delegates, expressed his gratitude for the organization’s work in NKR and provided a thorough status update on the economy, focusing on areas such as agriculture, hydro-electricity, mining and tourism.

During the meeting, both past and future projects were discussed, including a new AGBU complex, composed of 30,000 square feet of land, located in the center of Stepanakert, which is being spearheaded by AGBU in partnership with the American University of Armenia (AUA) and the TUMO Center for Creative Technologies. The paper writes that through the AUA Extension Program, NKR students will have the opportunity to attend specialized courses at the center that focus on English language improvement and preparation for university entrance exams, specifically the GRE/GMAT and TOEFL.

Additionally, the center will be home to both a chess club and an academy for young musicians. As Setrakian noted, the project will create an attractive environment for Karabagh’s youth to enjoy the opportunities of developing their talents while remaining in their homeland.

The end of the meeting was celebrated with a concert by the Karabagh Chamber Orchestra, the highly talented group which the AGBU founded in 2004 and has supported ever since.