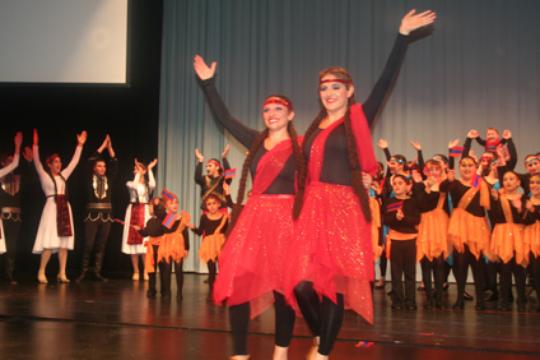 “It feels like just yesterday that the Hamazkayin “Sardarabad” Dance Ensemble of Chicago had its first practice in the Shahnazarian Hall at the All Saints Community Center in Glenview, Illinois.

On the evening of Oct. 13, the talented group put on an unforgettable first performance that warmed the hearts of the audience in a show dubbed “Dreams of My Land.” Each dancer embodied the mighty strength, pride, and unity of the Armenian nation, as friends and family members sat enthralled. The traditional “Pert Bar” warmed up the crowd for the different styles of Armenian dance ahead that night. As the curtain slowly opened, a two-tier pert (fort, in Armenian) was turned by both female and male dancers. Other traditional dances included the gracefully constructed all-female dance “Lori,” and the strength-defining “Kochari,” performed by the male dancers, which included members from the Detroit Hamazkayin “Arax” Dance Ensemble.

The Chicago “Sardarabad” has already performed at a wide range of events throughout the community. Just a week before this big performance, the older dancers performed two numbers at an Armenian-Assyrian wedding, promoting the tradition and culture of Armenian folk dance to a different group of people. A little over a year ago, the group also participated in aid for the Armenian Relief Mission in an effort to raise money for orphaned children in Armenia. The dancers performed an original dance choreographed by Dance instructors Houri Papazian and Sona Birazian for an audience comprised of mostly non-Armenians. Founder Steve Kashian and his wife, Rozik, were more than pleased with the groups’ accomplishment for carrying out such a significant cause. The Chicago “Sardarabad” chapter extends a special gratitude to Hermine Kholamian (better known as “Mama K”) for her hard work and beautiful seamstress skills. She has poured her heart and soul into this organization, and without her, the show simply could not go on”.