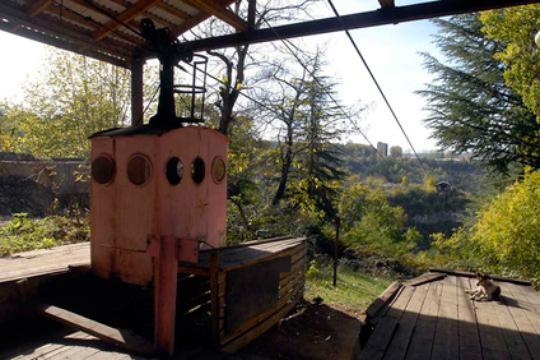 Eurasianet.org published Molly Corso’s recent article on inner development in Georgia.
Molly Corso is a freelance journalist who also works as editor of Investor.ge, a monthly publication by the American Chamber of Commerce in Georgia.

A rusty and dilapidated century-old manganese mine is emerging as a focal point of spreading labor discontent in Georgia. A trade union leader blames the libertarian economic reform approach taken by President Mikheil Saakashvili’s government for stoking worker anger.

A strike began at Georgian Manganese Holding’s mine on October 15, and unrest quickly spread across the country. The 3,700 miners at the mine in the central Georgian town of Chiatura are demanding better working conditions and a doubling of their current 300-lari ($180.72) monthly salaries. Operating in shafts up to 2.5 kilometers beneath the earth’s surface, the miners rely on equipment that largely dates back to the Brezhnev era.
Manganese is Georgia’s second largest export commodity. Executives at Georgian Manganese, a majority-Ukrainian-owned company, did not respond to interview requests.

Since mid-October, a variety of Georgian economic sectors have been hit by warning strikes – short, planned actions that serve as a prelude to negotiations between trade unions and management under the country’s labor code. The 10,000-strong railway workforce stopped train traffic for two hours on October 24, while workers at electricity provider Telasi walked off on October 19, and several hundred port workers in Poti held a three-hour strike on October 25. A bottling facility for Georgia’s famous fizzy mineral water Borjomi followed suit with a warning strike on October 23, as did several hospitals around the country on October 26.

Georgian Trade Union Confederation President Irakli Petriashvili stressed the strikes are a natural response for workers who have had difficulty in exercising their rights over the past several years. “If you can imagine there was a closed space for exercising rights,” he said. “Actually [there was] fear that was sowed by the police, government – not only the administration of the companies – and now they all [workers] are breathing free air, and that is why it was like accumulated dissatisfaction for many years [that] all came out together.”
The Georgian labor code, widely considered one of the most pro-business in the world, has been a source of contention between the International Labor Organization (ILO) and the Georgian government since it was adopted in 2005. While the code nominally protects the right to assembly and protest, workers have long complained they are threatened at the job if they attempt to organize strikes.

While some companies, including Telasi and Borjomi, have reached an agreement with their workers, others have not. The tension surrounding the labor conflicts has been complimented by public protests staged by socially vulnerable groups, including that of a loose confederation of destitute Tbilisi families that planned to gather on October 31 to demand a meeting with Prime Minister Bidzina Ivanishvili.
The early October parliamentary elections that vaulted Ivanishvili’s Georgian Dream coalition to power appears to have been a catalyst for the wave of strikes.
Rati Abdulshelishvili, a miner for 12 years, and one of the activists leading the manganese mine strike, told EurasiaNet.org that employees at the facility decided to take action following the legislative vote because they felt they could without the threat of reprisals.

“I believe that as a result of this election these people actually obtained a kind of guarantee that because of legitimate demands and actions they won’t be persecuted, intimidated or dismissed unfairly from their work,” added Petriashvili, the union leader. “It gave them the opportunity and space to operate freely.”
Petriashvili went on to stress that the union is not involved in all the strikes. The miners at Chiatura, for instance, are not allowing the union to organize them.
Meanwhile, some representatives of business groups see political motives behind the worker action.
“We have very strong grounds to believe these strikes are politically motivated because you cannot have seven strikes at the same time just after elections. … Someone has an interest in undermining the new government,” said Fady Asly, the president of the International Chamber of Commerce branch in Georgia. “The new government will start with iron chains around its feet.”
Zurab Tkemaladze, the chair of the parliamentary Committee on Economic Sectors and Economic Policy, met with 30-some striking miners on October 30 in an attempt to mediate the labor dispute. A member of the Georgian Dream coalition, Tkemaladze told EurasiaNet.org that the new government does not “rule out” the possibility that the strikes are an attempt to destabilize the country as the Ivanishvili government takes over.
Abdulshelishvili, the striking miner, said he and his colleagues are buckling down for a long fight.

“The strike will continue,” Abdulshelishvili said. “I have 3,700 men standing behind me. … Let the [Georgian Manganese] investors take their money out. We will ask Ivanishvili to buy it and manage it himself.”