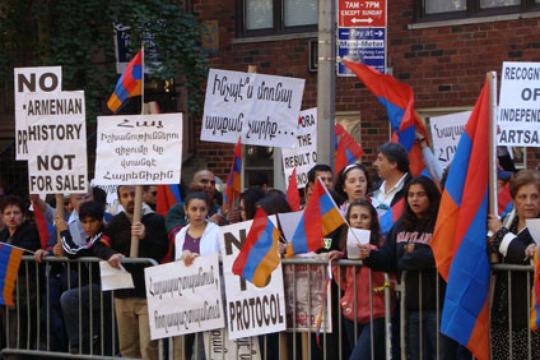 Turkish Prime Minister Recep Tayyip Erdogan paid a visit to Germany. According to Turkish media, Erdogan during his two-day visit will attend the opening ceremony of the new building of the Turkish Embassy in Berlin and will speak at the Berlin Institute.

October 1 Erdogan will meet German Chancellor Angela Merkel. It is expected that most of the talks will be on the crisis in Syria. At the meeting, the two leaders will also touch upon the problems of Turkish citizens in Germany and the process of Turkey’s accession to the EU.

Meanwhile, the Armenian and Kurdish organizations are planning to hold a joint protest near the Brandenburg Gate in Berlin against the planned visit of the Turkish Prime Minister to Germany.

The organizers of the protest accused the prime minister of Turkey in the oppression of Kurds and Alawites, and the denial of the Armenian Genocide. It is assumed that representatives of about 40 NGOs, including the Federation of Kurdish Associations, Alawite’s youth organizations, the Council of Armenians in Germany and Assyrian Federation of Germany will join the protest.