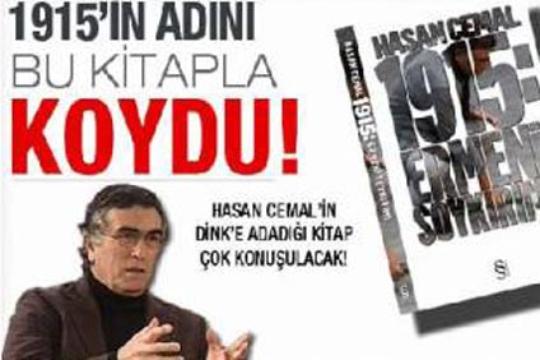 The book on Armenian Genocide – a bestseller in Turkey

Turkish “Zaman” speaks of the increasing interest of the Turkish society towards the issue of the Armenian Genocide and Hasan Jemal’s book on Armenian genocide published last month and already a bestseller is a most vivid proof of this point. The author of the book is one of the Young Turks’ leaders Jemal Pasha’s grandson, who not only refered to historical evidences reflecting the tragedy but speaks of his personal feelings from the denial up to the recognition of the Armenian Genocide.

This extensive study starts with the author’s view on this issue based on the article published three years ago, where he supports the Turkish government approach to the issue and develops up to last year’s speech in California University where Hasan Jemal publicly recognizes the Armenian Genocide. His grandfather’s political deliberations were presented in the book, where Jemal pasha particularly blames the Russian politics which had been aimed at constantly tensing the relations between the Armenians and the Turks. “Zaman” notices that no prosecution has been made so far against Hasan Jemal which is an indicator of Turkey’s overcome of different taboos.