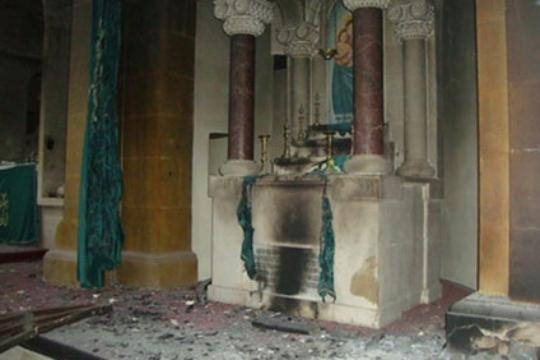 Azdag daily reports that the St. Kevork Armenian Church located in the Nor Kyugh neighborhood of Aleppo was set ablaze, local observers confirmed on Monday.

The spokesman of the Syrian Prelacy Jirair Reyisian, who spoke by telephone with the Beirut-based Aztag newspaper, said that the inside of the church, offices and artifacts have been badly burned.

“The recently closed Mesrobian Armenian school, which is adjacent to the church, including its kindergarten and elementary school buildings have been severely damaged,” added Reyisian.

According to him the Armenian community in Aleppo in light of this barbaric act condemns this criminal act with the conviction and belief that those responsible for these inhumane acts against placed of worship, starting with the historic Mosque to other places of prayer and now the St. Kevork Church, will be punished.