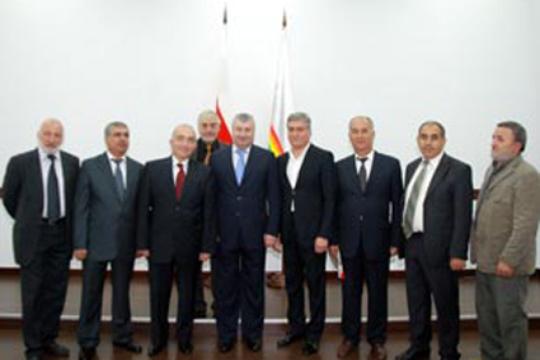 On September 23-27 the RA delegation of the Chief of Staff of Ministry of Diaspora Firdus Zakarian and the head of the CIS Caucasian Department Taron Shagoyan were in the Alania Republic of North Ossetia, where took part in the award ceremony of their President Teimuraz Mamsurov with the medal of the management and policies of “Sananor” Research Institute.

“As a result of the Institute’s survey, interracial relationships in region of RF North Osetia are healthy basis and there is no national discrimination against Armenians.” says the press service of the Ministry of Diaspora.

Firdus Zakarian thanked President Teimuraz Mamsurov for the care paid to Armenians and donated books published by the Ministry of Diaspora.

Alania president spoke warmly of the Armenians living in the country.
Members of the delegation, including the Artist Guzh Manukyan, visited Armenian church in Vladikavkaz, met with representatives of the local Armenian community.