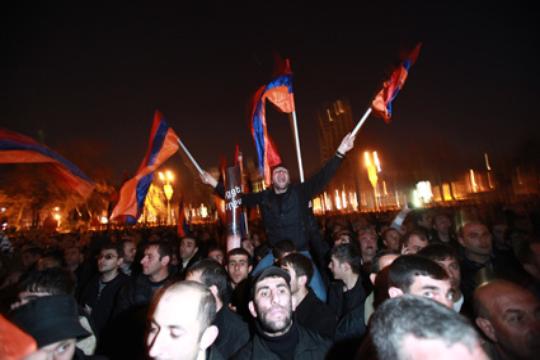 The Armenian people returned to the Liberty Square after a three-year ban on protests at the Square. At the end of March 17 rally the leaders of the Armenian National Congress with the unanimous support of the rally participants decided to march from the Matenadaran building to the Freedom Square.

After brief negotiations with the police HAK coordinator Levon Zurabyan declared that the public is allowed to enter the square. The exhilarated people run into the square which they were forced to leave 3 years ago. The opposition leaders congratulated everybody on this victory and gave speeches calling the public to be patient and trust HAK and its leader.

Ter-Petrosian said that they stand ready to start dialogue with the government if the latter frees all remaining “political prisoners,” starts an independent investigation into the March 2008 bloodshed and does not ban further opposition rallies in Freedom Square. ‘We have no reason to hurry up or hasten events as we are convinced that the success of the struggle depends solely on our patience, self-confidence, serenity and discipline. It’s the authorities that have to hurry up because a further delay could be fateful both for them and the country’ concluded Levon Ter-Petrosyan.