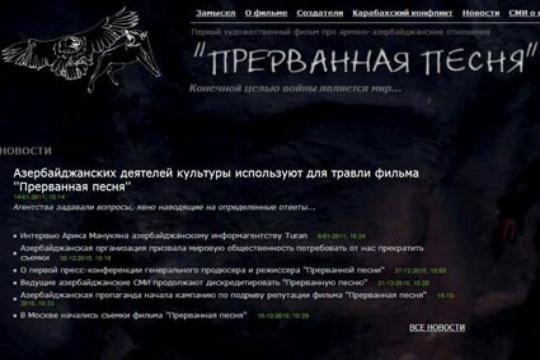 The Website of the Armenian Movie hacked by Azerbaijanis

Since opening the first art movie site www.prervannaya-pesnya.ru which is telling about Armenian-Azerbaijan relationship has been visited 25000 people within two days. From January 18 to January 19 at night the site has been attacked by Azerbaijani hackers and in result all visitors automatically readdressed into anti-Armenian content Azerbaijani sites. In a short time the site has been re-established by the efforts of web site administrators. The film makers consider the actions of Azerbaijan hackers as an intolerant treatment against the shooting film which is making by the efforts of Armenians.

We remind that the idea of shooting the film “Interrupted song” belongs to a group of Armenian young people living in Moscow. The aim of film is to represent the reality made during the ages in unbiased way which prevents the compromise between two nations now days. The film authors don’t defend one of the hero’s orientation but through the going discussion try to find the accepted solution for both sides from the made situation. The premiere of film will take place in Moscow at the end of May, 2011 then there is an aim to show the film in a big screen of USA, France, Georgia, Turkey, India, Near East and some Balkan countries. The director of the film is Arik Manukyan and major producer is Ashot Poghosyan. The film is funded from the personal sources of creative group but there is a need of extra finance for the mass scene shooting as well as for the organization of appropriate premiere-demonstrations in other countries. Shooting group is ready to discuss all the suggestions for helping the project which are not supposed to change the film plot.

In the photo: the main page of the website www.prervannaya-pesnya.ru.