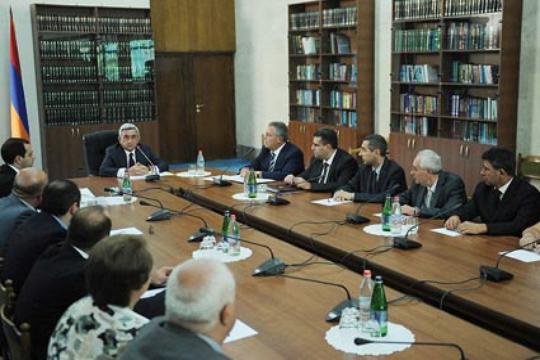 Serzh Sargsyan to Meet the Representatives of the Judiciary

Today President Serzh Sargsyan had a meeting in the RA Court of cassation for the implementation of the perspective of the RA legal and judicial reforms in 2012-2016.

From the President’s official website “1in.am News and Analyses” has learned that members of the Council of Justice, the highest judicial tribunal and other government representatives were present at the meeting.

They introduced to the judicial authorities regularities of disciplinary policy during the last five years, the positive and negative trends. It was noted that in the last two years, positive trend has been observed in the activities of the RA Council of Justice.

As a result of the meeting, the key provisions of the Council of Justice are separated, which will guarantee the implementation of the principle of public accountability.

“Every legal state, highlighting the independence of the judiciary, views it as a unique way to assume responsibility for society. We also realize the value of independence, but also must understand that freedom cannot be absolute, otherwise, we simply create an atmosphere of impunity.

Legal and judicial reform program must be a start of a new mode with new standards. Today your activities should be in line with the pace of the reform process, “said President Serzh Sargsyan at a meeting with the representatives of the judiciary.