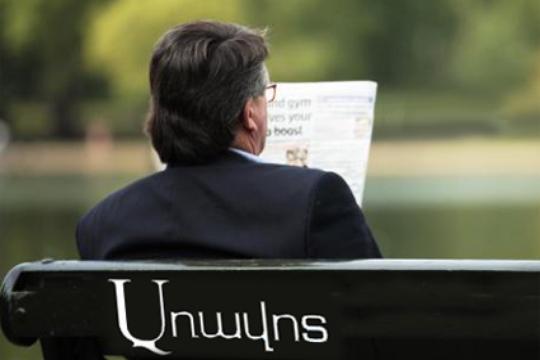 The Team of the Heritage Party is Unknown

RA Human rights defender, former MP of “Heritage” party, Larisa Alaverdyan during the “Urvagic” program on “Kentron” TV channel, has mentioned that she is disappointed because of her party’s policy. ““Heritage” has a strategy strange for us. The methods that can be used by a larger party, then be criticized and judged and at the same time remain as it is, the small party mustn’t use. It’s a strange methodology for me.” Mrs. Alaverdyan noted that they must keep at least the feature of small parties to react honestly to this or that event.

On this account another member of “Heritage”, Stepan Safaryan in the interview with “Aravot”, assured that Larisa Alaverdyan has always been of the same view about “Heritage” party and said” “In the pre-electoral period she had said that very concretely inside the party and now says publicly as well. The paper inquired from Ms. Safaryan whether he also shares the view and he answered: “I take into consideration all the views and there is still time left to see how many right decisions we have made during the pre-electoral period. So, I will wait to see which view is right of all.”

According to another “Heritage” party member, Anahit Bakhshyan “Larisa is free in her commentaries; she is not the member of the party. I am the member of the party and I have taken part in voting, I was for or neutral, but anyhow I have taken part in all the decisions of the party. Thus, I can’t give the same estimates as Mrs. Larisa. I don’t agree with her ideas”. What about Larisa Alaverdyan’s view that they must keep at least the feature of small parties to react honestly to this or that event, Mrs. Bakhshyan didn’t agree: “She reacts to all the events, she just means “Vahe Avetyan” social movement, and “Heritage” reacted by announcements. Now everybody makes announcements by himself. It wasn’t the same as in the past”.

To “Aravot” observation that previously “heritage” was among leaders, Anahit Bakhshyan answered: “The same is now, I have gone, Styopa and Zaruhi too, but each of us individually. The team work isn’t seen because the core of the party has changed. And the honesty typical of small party was about our behavior while being in NA for 5 years. It isn’t known whether it can be the same in the future.”