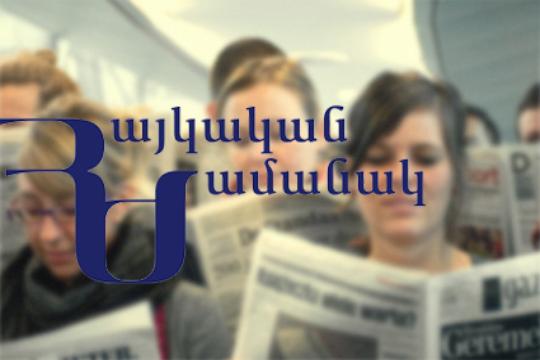 “Haykakan Zhamanak” writes that the representatives of “Prosperous Armenia” were trying to deny the press release, according to which PAP leader Gagik Tsarukyan in the meeting with Masis representative had announced that he had put two conditions in front of Serzh Sargsyan for supporting him. Gagik Tsarukyan demanded to give them the 30% of the government and change the PM. “If he agrees, we will support him, if not I will run my own candidacy,”- according to “Hraparak”, said Tsarukyan to the members of his team.

The press secretary of PAP, NA MP Tigran Urikhanyan commenting on this article said several times the statement learnt by heart. “We will speak of presidential elections in proper time. I don’t comment on gossip.” The director of PAP Ararat regional branch, NA MP Tigran Stepanyan insisted that news doesn’t correspond to the reality. The interview of Masis PAP mayor Dmitri Nazaryan with “HZh” shows another attempt to veil the reality. He denied the news by all possible maneuvers.

“The fact that PAP didn’t create an opposition, because Serzh Sargsyan refused to change the PM, is known to everybody. And Gagik Tsarukyan himself takes the chance every time to criticize the PM saying that economy is in bad condition and serious changes must be made.”- adds “HZh”.