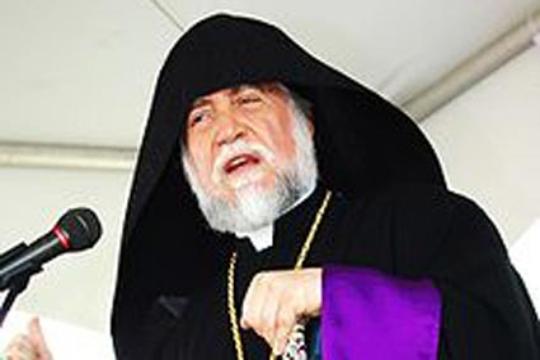 According to the Lebanon media, his Holiness Aram I Keshishian, the head of the Catholicosate of the Great House of Cilicia and Catholicos of the Holy See of Cilicia of the Armenian Apostolic Church since 1995, announced the implementation of three projects as part of the preparation of the 100th Anniversary Commemorations of the Armenian Genocide.

As reported the architects of the Catholicosate are invited to complete the tasks.
The three projects are the following:
Renovation of the Statue symbolizing the post-genocide revival of the Armenian people (The bronze Statue was prepared to mark the 50th commemoration of the Genocide in 1965 ;Bikfaya, Lebanon), Genocide Museum at the Birds Nest Orphanage in Byblos (The oldest building on the campus of the orphanage, which has been classified as a historical monument, will become the site of the new museum;Lebanon) and the Martyrs’ Chapel in Antelias (The Chapel was build in 1936 and later renovated in 1993 and 2007. It will undergo a total renovation in preparation for commemorative prayers in 2015 ;Lebanon).

His Holiness Aram I is also inviting Armenian benefactors to contribute to the project.